Your home in Barcelona

The hotel is in an excellent location on Las Ramblas, a street in Barcelona full of life. The attention is very careful and always with a smile, kind and attentive. You feel a little like home.

Very well attended, the best. Many details designed for the customer. Your receptionists are very friendly and helpful. We feel very well and we recommend it without hesitation.

My partner and I recently stayed here for 3 nights and were pretty happy with our stay. 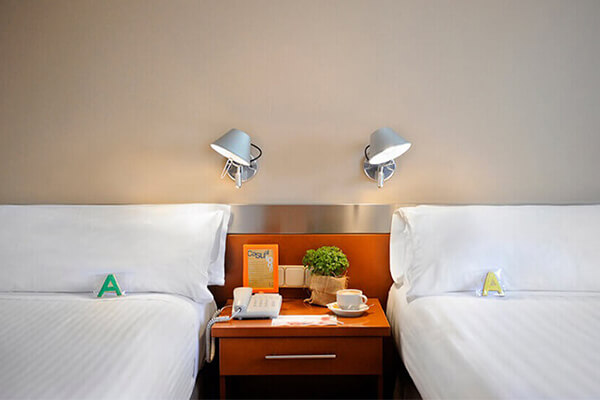 We have been at home, a few small details made me feel that they dedicate time to personalized attention.

Barcelona is easy with our super Guide

The secrets you need to know to enjoy the city as a local.

Cradle of Catalan culture, among many other cultures and civilizations, witnessed great changes as the Industrial Revolution and civil war between many others, Barcelona has a fascinating history.

In Neolithic times, there was human presence in the territory of Barcelona. At the end of the first century BC was founded as a Roman colony with the name of Barcino. It had a few thousand people and was surrounded by a wall of defense that remains are still preserved in the old town.

For over 200 years, Barcelona was under Muslim rule, and the Christian reconquest became the Carolingian Empire and country habitual residence of the Crown of Aragon. The fruitful medieval Barcelona turned into a political and economic center of the western Mediterranean. The Gothic Quarter of the city represents the precious witness of the splendor that Barcelona lived from the thirteenth to the fifteenth.

Cradle of Catalan culture, among many other cultures and civilizations, witnessed great changes as the Industrial Revolution and civil war between many others, Barcelona has a fascinating history.

Barcelona is a benchmark in terms of tourist visits being one of the 10 most visited cities in the world in 2016. The city of Barcelona is characterized by its cosmopolitanism and Mediterranean character. Its architecture, traditions and culture make it unique and magical.

The communication routes to Barcelona are diverse and effective. The Barcelona-El Prat airport with its two terminals has flights from many destinations. The port of Barcelona or the modern train stations offer fantastic alternatives to get from Europe or other Spanish cities.

Arriving by road is also a useful option since the multiple entrances to the city are comfortable for those who prefer to arrive by bus, car or motorcycle.

Move inside the city

Moving around inside the city is not a problem in Barcelona. Its multiple public transport lines bring you anywhere. The metro, the railways of the Generalitat and commuter trains will not only allow you to move around Barcelona but throughout the province quickly. If on the other hand you prefer the views, the tram, the bus or the taxi will help you to move easily.

If you want to use public transport there are different types of subscriptions: There are some days, integrated, which house various types of public and special transport, which will make it cheaper to travel.

The Sant Jordi festival, on April 23, is one of the most beautiful celebrations to live in the city. The day of the rose and the book saw Barcelona of roses and stops with books, signatures of the most popular writers of the moment and an atmosphere full of love.

Les festes de Gràcia dress the streets of Barrio de Gracia with spectacular sets for a week where everyone can visit.

Throughout the year parties are held in the neighborhoods of the city.

Neighborhoods and places you can not miss

Located in the center of the city, the wonderful Gothic Quarter with its network of streets and squares has a thousand places to discover. In it you can find vestiges of the city as remains of the wall or fascinating facades.

There is also the Cathedral of Barcelona in Catalan Gothic style built in the fourteenth century.

The Sant Jaume square that houses the city hall of Barcelona and the palace of the Generalitat de Catalunya is a magnificent open space that you can not miss. A few minutes away is La Plaza Real, next to the Ramblas in the Neoclassical style, pleasant and lively.

In the Plaza del Rey we find the museum of the city’s history and also medieval buildings.
The Portal del Ángel shopping street or the Jewish Quarter can also be found in the Gothic Quarter.

Located between Las Ramblas and Poblesec, the neighborhood of El Raval is a historical, authentic, full of life and personality. They emphasize its multiculturalism, its multitude of art studios, galleries and bookstores.

El Mercat Obert del Raval is a fair for young urban designers and independent artisans that has an appointment each weekend in the Raval, with exhibitors and points of sale on the street.

The Barrio de L’Eixample is divided in two by Paseo de Gracia. This one maintains an almost symmetrical structure designed at the end of the 19th century by Ildefons Cerdà.

This is a mostly residential neighborhood although it has commercial areas such as Passeig de Gracia itself, in which the typical Art Nouveau works of Barcelona stand out.

In the same is the Paseo Sant Joan, which starts at Arc de Triomf and ends at the entrance of the Barrio de Gracia.

The Barrio de les Corts, in the upper area of ​​the city is a quiet and elegant space. It is mostly a residential neighborhood although it also has places to visit in the neighborhood such as the maternity gardens, a park with modernist buildings where you can walk.

Located at the head of Passeig de Gràcia, Gràcia was an old village, which is why the current name is Barrio Vila de Gràcia.

It is a neighborhood with a special charisma, its cosmopolitanism, its bohemian atmosphere and the neighborhood atmosphere remind of a small town within the city. Gràcia is a living space of culture, creativity and a great variety of artists.

Its multiple squares give rise to people meeting in the street to talk and stroll through its charming streets.

If you travel to mid-August, you can not miss the Fiestas de Gràcia.

The neighborhood of Poblenou is located touching the sea, its rambla, which reaches the beach of Bogatell, is full of life thanks to its welcoming inhabitants and its terraces. In it you can find vestiges of its industrial past as the chimneys of old companies located in the neighborhood.

Poblenou is currently an emerging neighborhood, full of creativity, of artists who have acquired old spaces and transformed them into new spaces while maintaining their essence.

The Park of the center of Poblenou is called the district 22 @, an area dedicated to new economic and technological sectors. The Park is also a fantastic space for physical activity or simply take a walk and observe the different works that inhabit it.

The Ramblas deserve a separate point since it is one of the main axes of the history of the city. Its 1.2km length joins Plaza Catalunya with Port Vell. On your right we find the Raval and on your left the Gothic Quarter.

It is a pedestrian promenade, full of terraces, flower stalls and street performers who perform their functions for the entertainment of the passerby.

In the same Rambla you can also find the Teatro del Liceo or the emblematic Mercado de la Boqueria.

On the Ramblas you can stay at our fantastic Hotel Oriente Atiram.

When you visit Barcelona you can not forget to visit the magnificent works of Gaudí that inhabit the city.
The Cathedral of the Sagrada Familia in the neighborhood that bears the same name will not leave you indifferent despite not being finished. The Park Güell located in the upper part of Barcelona is a magnificent space full of impressive details. Other works such as La Casa Milà (La Pedrera), Casa Batlló, Palau Güell, Bellesguard Tower (Casa Figueras), the lampposts of the Plaza Real, the Casa Vicens, Casa Calvet, Finca Güell, the Colegio de the Teresianas or the Miralles Portal, are also essential if you do a Güell Route. Visit our post on Ruta Gaudí to learn more in depth about his work and how to visit it.

The markets of Barcelona are mandatory, one of the most impressive is the market of La Boqueria, located in the middle of La Rambla. In this you can find products from around the world of the highest quality. At the same time it is a market where you can enjoy a varied and high quality gastronomy.

In Barcelona we find a variety of more than 40 markets, both daily and weekly, go out and discover them.

Barcelona for families with children

Cosmocaixa is the Science Museum of Barcelona, ​​where children and adults will enjoy interactive exhibitions and incredible activities.

The Tibidabo amusement park crowns the city from its summit, a park where you will find fun without stopping and spectacular views.

The Aquarium of Barcelona located in Port Vell has 11,000 animals and 450 different species. This is divided into different aquariums where you will discover the different types of marine fauna of the planet.

Also in the theaters of the city you will find works for the little ones, like The Musicians of Bremen in the Gran Teatro del Liceo.

The nightlife in Barcelona offers a wide range of options. Beachfront terraces on the seafront, nightclubs in the Olympic port such as Opium Mar, Shoko or Catwalk, concert halls such as Sala Apolo or Sala Razzmatazz or more alternative environments such as Marina Street. You can also find a wide range of musical bars on the Born and the Raval with curious places like La Ovella Negra.

Talking about gastronomic Barcelona is always a pleasure thanks to its magnificent range of options.

In the city we find more than twenty restaurants with Michelin stars, demonstrating how deeply rooted gastronomy is to the local culture. Despite this establishment, we find restaurants of all kinds of great quality.

Des of memorable Japanese as the koy Shunka or the Miu to Italians of great caliber like the Da Greco or the Bella Napoli.

We can not stop mentioning our fantastic restaurant in the Tres Torres Hotel, located in the upper area of ​​Barcelona, ​​with modern and avant-garde cuisine, as well as fusion restaurants of cultures such as the Ikibana.

If you prefer to enjoy standing meals you can always take a walk around the Barri de Gràcia where you will find take away establishments of many types of food.

Thank you, Review your email to complete the subscription